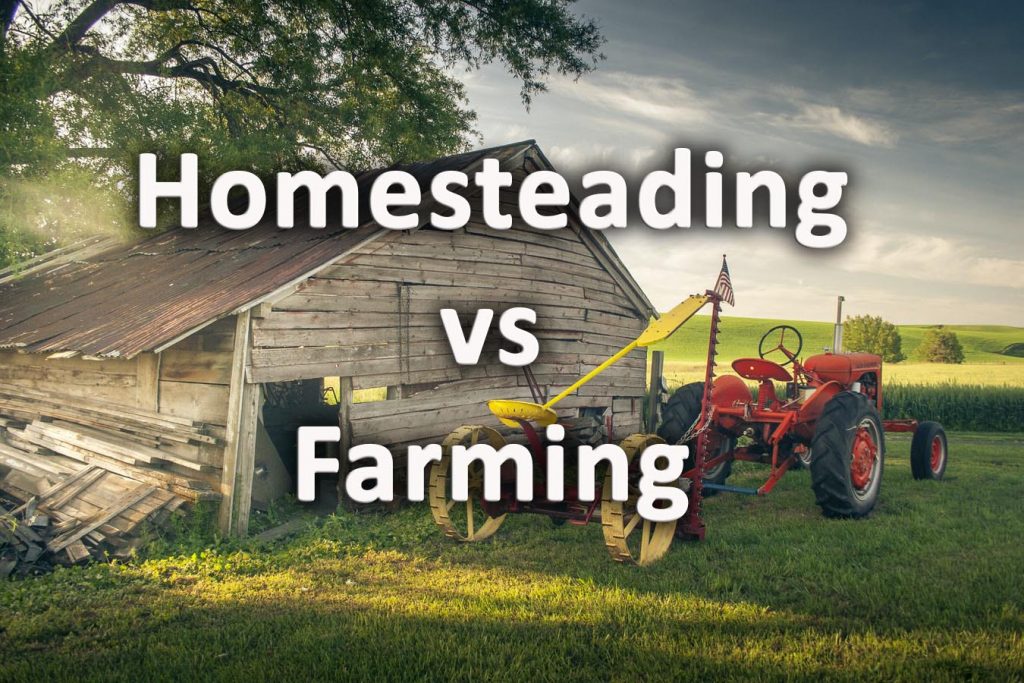 What’s the difference between farming and homesteading?

Homesteading and farming are both pursuits which involve working the land to produce goods. Due to varied scopes of both farming and homesteading it is possible for the two to overlap or even become confused. Catalysts for some of this confusion include historical and social economic forces.

One hundred years ago our economies were not as developed as they were today. The wide range of products, services and supply chains available today have changed fundamentally how we view our existence.

In recent history people understood that both security and survival was dependent on guaranteeing a food supply. This incentivised people to provide for themselves on small homestead farms. Today most people have no idea where their food even comes from!

Feelings of security have been replaced by financial factors such employment and pensions. The pursuit of survival has been replaced with a lust of prosperity and materialism. Agriculture has become mechanised removing the need for rural living. Therefore history and economic progression has led to a continued separation of both farms and homesteads.

We will look deeper into this matter to find out what the real difference between farming and homesteading.

Modern farming is generally characterised by large, industrial production of agricultural products for the supply of the market place. Very much like the modern economy mechanisation is a way of boosting efficiency and keeping costs low.

This is particularly the case with the production of crops like wheat, grains and root vegetables. Farms seek to produce income in the form of currency and primarily rely on one or a few different crops. However farms can also be mixed especially if they are producing for local or specialised markets.

Farm buildings are generally large and cater for commercial operations such as storing grain and hay. Many farm buildings are expansive to house large quantities of livestock at any one time. Such dwellings are typically serviced by large, industrial equipment and can have a factory like feel.

Farm machinery is typically large and industrial in nature. Machines such as tractors and combine harvesters are utilised to cultivate and harvest larger areas. Livestock farms also have large specialist equipment for milking, feeding and other, general operations.

Modern farms on the whole rely on large areas of farmland. This is to produce enough products to be economically viable on the mass markets. However farms which produce for more specialised markets such restaurants can be smaller and more mixed use.

Revenue from farms today generally comes from one main source. As today most people buy their food from supermarkets transactions are typically done in bulk. Hence, farms revenue usually comes from one or two clients and is the farms primary income.

Putting all types of farming into one category would be wrong as there are many types of farming. Within these classifications there is such a broad variation of scale and specific niches. However the main types are.

The farming of eggs, dairy, poultry, lamb, pork and beef, these usually are for the mass market, sold to supermarkets. Typically these involve familiar breeds good for a specific type of production. Some farms may diversify with specialist rare breeds for a niche market.

This is farming which involves the seasonal ploughing and mechanical harvesting of large areas. Wheat, grains and vegetables are farmed in this way.

These involve the raising of fish for mass markets and can consist of sea enclosures or manmade tanks.

Orchards are farmed for the production of fresh fruit and nuts and are traditionally large operations with mechanised harvesting. These also include large, industrial, vineyards.

Homesteading is generally practiced on smaller plots than farms with the primary consumer being ‘the home’. Homesteading is more of a lifestyle based on the production of good quality, organic, produce.

This level of personal production means that homesteads are more varied with mixed functionality than farms. Homesteaders generally seek to produce their own fruit, vegetables, meat eggs and dairy for the table.

There are many reasons to homestead including sustainable ethics, raised standard of living and a healthy diet. Homesteaders can run a business selling their produce but often their main function is to provide for the home.

The buildings of homesteads are typically smaller than farms and generally have more of them. Homesteading requires varying dwellings for; livestock, smoke houses, storage houses, Workshops and dry stores.

Homesteading machinery is generally less industrial and smaller than farm machinery. Ploughing is usually carried out with large tillers than large agricultural machinery.

Some self sufficient homesteaders rely on energy neutral machinery such as medieval ploughs. These need to be operated in conjunction with animal husbandry techniques. Homesteaders do use diesel powered machinery like tractors but these are usually smaller than commercial farm machinery.

Homesteaders will often use professional gardening and landscaping equipment to carry out land management tasks.

Homesteading on the whole is practiced on relatively small plots of land compared to farms. However it is sometimes the case that homesteading sites do exist as a part of larger farms. Homesteading land is the land immediately around a specific home which is utilised for the sustenance of that home.

It is rare for homesteading to be completely isolated from the modern economic system. Generally there is always some sort of balance between self sufficiency and the wider system. Therefore how much revenue you require will depend on if you have a mortgage, rent, internet, electric, mains water etc.

Most people are going to have to pay some sort of tax to their government. Therefore it is rare for a homestead to provide all of its earnings from the homestead itself. It can be done but most of the time homesteaders have a secondary income.

Maybe one family member has a full time job or a stay at home business. The general point being homesteading does not necessarily mean you rely on your homestead to make a living.

Homesteading itself seems to cover a broad scope of situations and practices. People who practice homesteading do not even necessarily have to live on a homestead.

In fact the word Homesteading has become a broad description of people who try to be as self sufficient as possible with what land they have. Hence we have identified some of the other pursuits which neatly fall within homesteading.

Self sufficient homesteading is the most typical type of practice we think of when discussing homesteading. Most have an idyllic image in their mind of a rural home surrounded by land and enchanting countryside.

The land is usually a patchwork of varying, self sufficient practices such as poultry, farming, greenhouses, vegetable plots and orchards. Self sufficient homesteads at least aim to be as self sufficient and as off grid as possible.

Hobby farming is small scale farming for the enjoyment of the farmer or homesteader. This type of homesteading does not need to be profitable or self sufficient. It is solely for the enjoyment and experimentation of the hobbyist.

Hobby farming can evolve into a business or self sufficient homestead if enough room is available. Hobby farming is perfect for homesteaders who love rare breeds or quirky pursuits like growing rare mushrooms.

Sustainable gardening is basically taking elements of self sufficient homesteading and applying them to smaller gardens. These can be still be large operations but are generally mixed with ornamental gardens.

Sustainable gardens will have vegetable plots, food forests, fruit trees and chickens but more in a gardening sense. Sustainable gardening is using what garden space you have to be as self sufficient as possible. This can also be referred to as eco gardening or garden homesteading.

What is the difference between Homesteading and farming?

Farming and homesteading are different but they share the same fundamental causes but for different reasons. Both aim to utilise the land to produce products for consumption.

However farming mostly produces for larger markets while homesteads provide for the families who live in them. Consequently ‘in general’ farms produce less variety and more volume whilst homesteads produce greater variety and less volume. 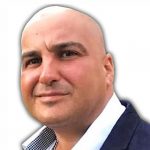 My fascination with self sufficiency started when visiting the family farm in Cyprus when I was a boy.  I observed how village farmers lived in harmonious abundance with their surrounding, natural, environment. Growing up in London I always contemplated the deep contrasts between city life and rural farming communities. Practicing both landscape architecture and self sufficient homesteading has shown me what powerful drivers they are for positive change on the planet. I believe that by combining homesteading, permaculture and sustainable development we can create happier and healthier communities for the future.